One experience in my senior year of college shaped my teaching forever. I chose French 102 as an elective, because I’d always been fascinated by languages. A little self-study and my basic knowledge of Spanish got me through the placement test into the second semester, even though I’d never officially studied French. Although I still can’t do much more than order a croissant in the language, what I learned about teaching language learners through that class was invaluable. 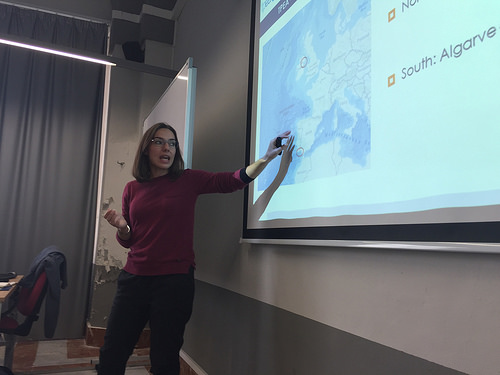 The assignment was a simple one: watch a French film and present about it to the class. I watched my film and understood it, but I realized that the far more challenging task would be helping my classmates—who like me, had a very elementary grasp of the language—understand the film from my French presentation, but without the benefit of seeing the action play out visually. I knew my explanation in French would not be enough, so I had to carefully choose my visuals for my PowerPoint. I broke the action down into the most basic plot points. I decided key words would not be enough language scaffolding, so I used simple sentences, paired with a shot of the film that showed as much action as possible. Because the film was about men escaping from prison by digging a tunnel, I couldn’t avoid using the word pelle. I knew my classmates wouldn’t know that word, so I underlined it and added a small picture of a shovel to the slide. I could tell my presentation was effective because every time our teacher asked someone to retell the story of one of the films, someone always told mine.

I don’t tell this story to highlight how great a student of French I was or how great an English teacher I am, but to show how the principles of good teaching in general apply specifically to teaching language learners. This was many years before I learned the term comprehensible input in my Master’s program; but as a senior education major, I knew that we use scaffolding, support to help our learners get from where they are to where we want them to be. Research shows that all students benefit from techniques teachers implement to support English language learners (ELL), and vice versa, many of the techniques good teachers use naturally can particularly help ELLs.

ELLs do require special modifications, however. Making content understandable and accessible to language learners by taking their linguistic needs into account is called comprehensible input. The SIOP Model, developed by Echevarria, Vogt and Short in the 1990s, is the most thorough and widely-accepted methodology for supporting ELLs. They identify three specific techniques teachers implement to make content accessible to English language learners.

While it can be challenging to meet the needs of English language learners at different levels in a mainstream class of mixed backgrounds and abilities, a few conscientious adaptations can go a long way in improving their performance and experience. One simple key is ensuring that the content you are providing is comprehensible input to the learner—using appropriate speech, clear instructions, and a variety of presentation and assessment techniques.

http://www.cal.org/siop/about/Making Content Comprehensible to English Learners by Jana Echevarria, MaryEllen Vogt and Deborah J. Short (I used the 4th edition but there is also a 5th edition) Exit Slips: Your Ticket to Closure Addressing the Culture of Harassment
Scroll to top